Assaf Cohen (15th of may 1990 in Jerusalem. I'm 30 and still in Jerusalem). I finished my studies at Bezalel Academy of Art and Design (2019) in the field of ceramic design. As of today I'm working in a big old studio in the center of town, with my girlfriend, who is an amazing ceramic artist herself, and a bunch of other friend-artist doing everything from sound-art to cutting-hair-art.

Tell me, how is your working process?

Generally there's an idea, which is a kind of intuition. Most of the time the idea is pretty much the whole design process in a flash: function, form, material, technique. These kinds of “ideas” float in my mind constantly —mugs and lamps and vases just floating waiting to exist. The interesting (and difficult) part of the process, for me as a maker, is to fish for an idea and create it. I really don't have any understanding why I choose that and not this; sometimes I want to challenge myself, sometimes I'm lazy, sometimes it's something someone said the other day. The important thing for me is to sit at the potterywheel or whatever and create —to give birth to an idea—; then the practicality of the working process folds out before you like a map and the week is clear and lucid.

You are a ceramic designer, why ceramics?

I wanted to be an architect all my life. But over the years I came to understand that what I love about architecture is a fantasy and does not exist most of your career in the field. I found that I can be an “architect” without all the bureaucracy, politics and the “computery” life style by being my own maker. In the field of ceramics you can design and build 3-D objects and solutions with just your own two hands in the space of a studio. For me this is the perfect dream: having the whole process in my mind and in my hands. I guess what I'm trying to say is that I chose freedom (with all its downsides) overall. 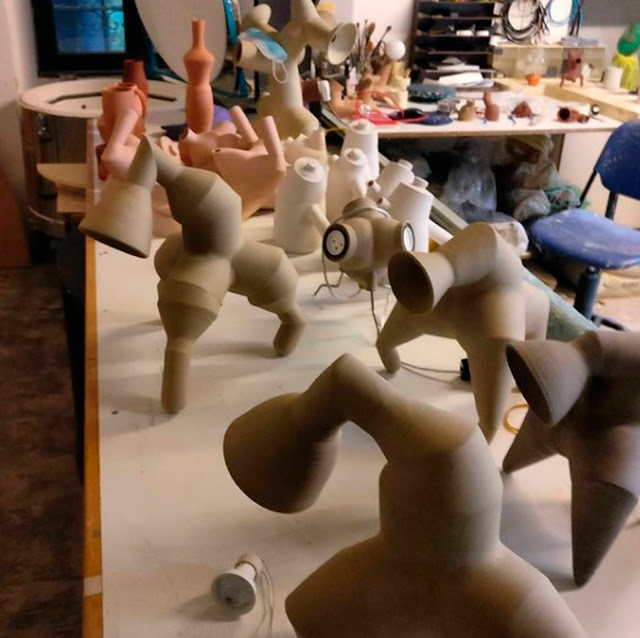 Do you usually work thinking about the space where the works are going to be held or is it a decision you take later on?

In the field of usable items, I think it's more than necessary to understand where the item is going to potentially be held, stored, exhibited. It's in the ”dna” of the object how it could be used by the people who own it and where they usually and practically put all items.

Boris Groys says “Genuine modern design is reductionist; it does not add, it subtracts. It is no longer about simply designing individual things to be offered to the gaze of viewers and consumers in order to seduce them. Rather, design seeks to shape the gaze of viewers in such a way that they become capable of discovering things themselves” [1]. Do you consider your work reductionist? What do you expect from the viewers and consumers (in case you expect something…)?

I like the idea that people “discover” through good design. It relates to the idea that life is an adventure —an exploration. Art, design and architecture build the physical world around us (biological and organic life are also design in my eyes), therefore they construct the place of exploration. They literally build the contour of everyone's separate and collective adventures. I expect the viewers to enjoy the moment in their “exploration” when meeting my designs. It's less important if they purchase the item... but if they enjoyed imagining owning it, it's a lot for me. I dont think I'm a reductionist in the sense that my designs are sometimes the opposite. It's not easier, in any way, to create or own a fragile handmade electrical socket. It gives this simple object a place in the world that it didn't “need” —nobody asked for this to be. It makes life more “complicated” for everyday use and for the eyes. so it's kind of anti-reductionist in essence but maybe not in style. Maybe I like things going both ways. Making paradoxes and contradictions is the only way I understand the world this days.

Spanish artist Elena Alonso talks about how difficult it is to distinguish among art, design and craft nowadays (three “ways of making” that are present in your work). I am aware it is a very cliché discussion —the gap between high and low culture in the XX century— but, what do you think? Which is your position on this topic?

I chose the field of ceramics because of how easily and elegantly it holds together these “three ways”. It gives me the complete freedom to not choose “ways” or discuss the topic at all. Of course, this means I'm obliged to do so all the time. The gap between high and low is the gap between two words describing a situation— that means they are based on an endless circle that goes nowhere.

She also tells how craft “is a practice that has something to do with affectivity and proximity relationships” [2]. Do you have an affective view of your work/practice?

I also love the naked colours of your work. How do you decide the colour?

Thanks! It's mostly laziness and partly wanting to expand and deepen the contradictory relationship between the materials and ideas in my object. I'm serious about the lazy part, it's an important part of my life and for understanding how my art evolves. I naturally love colors, and lots of them, colors make me happy in ways I don't know how to explain. But, it's very difficult to glaze complex 3-D ceramic objects in a expertly fine way. So you can say, I was afraid to go into this segment of ceramics and because of that my work is mostly “naked”. But it's also true that I learned to love and value the endless natural color template of clay. My works evolved with this notion and gained their personality from it. This days I'm working on my glazing technique and lots of my new items are full of very unclayish colors! For better and for worse. 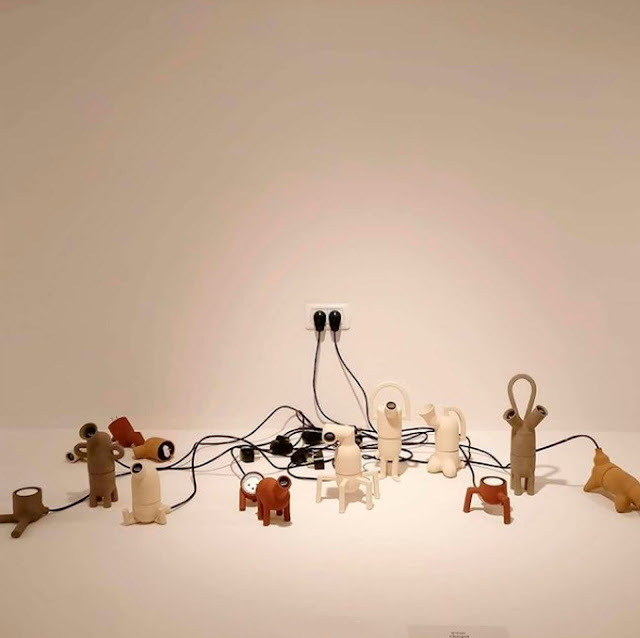 Maybe it is just coincidence, but I can notice so much emphasis in pieces related with electricity and artificial light (they are my favourites by far). Is there a hidden meaning about illumination (maybe a metaphysical one) or is it just my imagination?

Electricity is magic, it's energy and life itself in many physical-biological ways. And I love the feeling (aesthetically and imaginatively) of taking a hand made sculpture and “pluging it to the wall”. It's like giving my craft life in the most literal way. This “electrical sculptures” have veins and organs, they need energy from a external force like the wind, sun, fire or water (or whatever way electricity is harvested) and they can die. Also, there's something very “right” about clay and fire (or electricity in this case); from safety to history and culture.

Elena Alonso says that “Craft has a very relevant, contradictory yet vital place in our time” [3]. Julia Bryan-Wilson also talks about these contradictions of the contemporary craft world, saying “Craft is not contemporary. It is outmoded; it is old-fashioned; it is kitsch; it is domestic. It is the residue of the homespun, the folksy, or the functional” but also “Craft is contemporary because it is progressive, because creating things by hand yourself proposes an alternative microeconomy of local making, a system of exchange more akin to bartering with its emphasis on trade and tactile connections to supply-and-demand” [4]. Do you find contradictions in your process or point of view? What is contemporary for you? Does this even make any sense for you?

I really believe, with all my heart, that the modern world is going way too fast. Ideas, stuff, animals and people are being created and thrown away in growing speed. Everything is literally losing value. Choosing craft and even more so, ceramics, is a medicine, first of all, to myself. Working with my own hands —controlling the process from beginning to end, creating very little money and waste, helps me stay balanced and mindful. In crafts such as ceramics things take time and effort, and by “paying” in “time” I earn value to my days. And by putting “effort” I earn strength. I wouldn't say this is contradictory to anything but it's slower in such a way that creates tension between my life/art and my surroundings. I do feel like a rebel just by going to the studio and making a teapot when its 40 degrees outside and nobody needs or wants anything to do with warm liquid. It makes everything absurd in a way I feel is comfortable and appropriate for this crazy-covid-shit-Trump-2020-world. It makes sense by not making too much sense. It's political and contemporary by not being political and contemporary and it's full of contradictions and paradoxes by just being a fucking teapot.

Sorry for the long difficult questions and thank you very much! 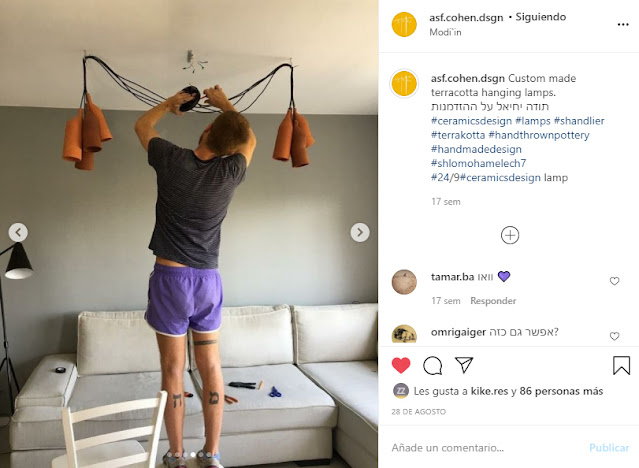 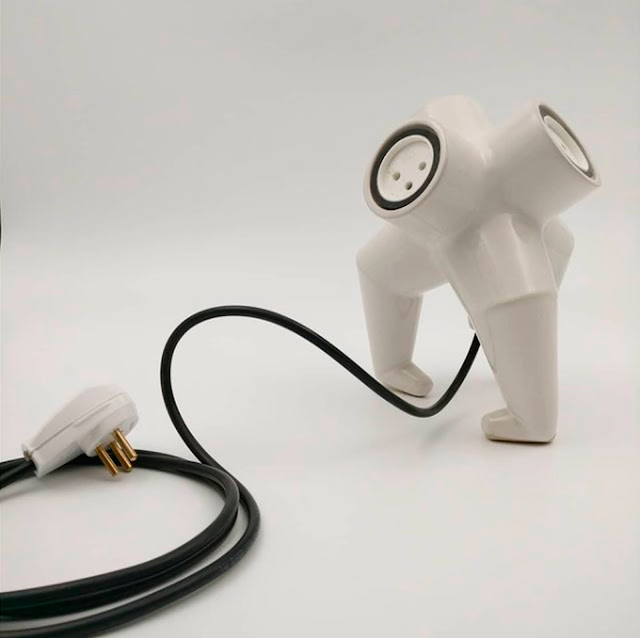 4. Julia Bryan-Wilson, ``Eleven Propositions in Response to the Question: “What Is Contemporary about Craft?”´´, The Journal of Modern Craft (volume 6, issue 1 march 2013): 7-10. Disponible en: https://www.academia.edu/24587811/The_Journal_of_Modern_Craft_Eleven_Propositions_in_Response_to_the_Question_What_Is_Contemporary_about_Craft_ 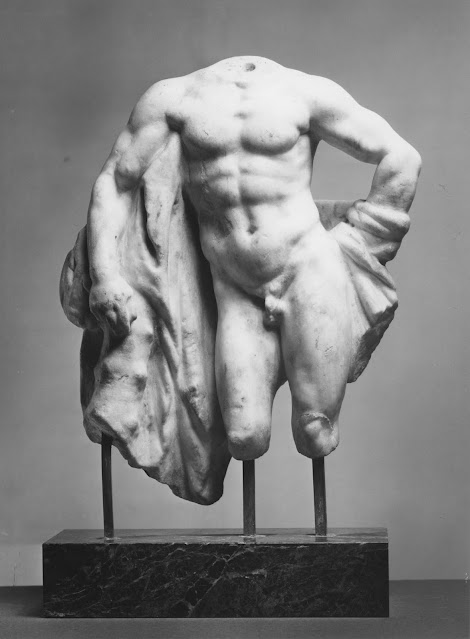 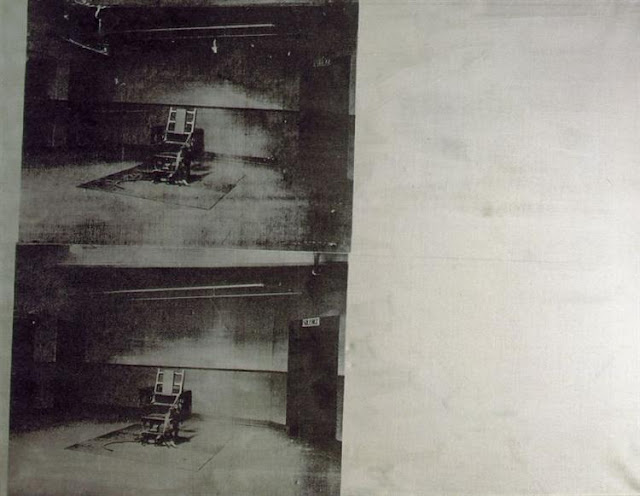 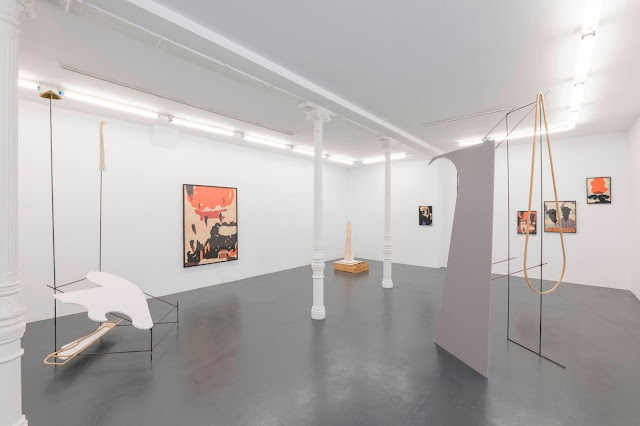